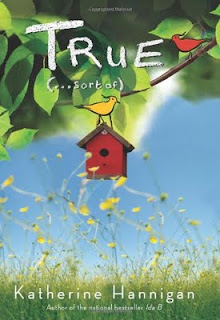 Little Delly Pattison is curious, mischievous and full of life! In Delly's words, you could say she is Dellyventurous, or even fantabulous! But Delly would describe herself as horribadible...and it seems that everything she tries just ends up getting her in trouble. Whenever she tries something for fun it just seems to blow up in her face.

My favorite Delly expression is "Happy Hallelujah!" and when she says this you know that she is filled with the biggest amount of enthusiasm and happiness a person can muster.

But all of this enthusiasm does mean trouble for Delly, and things have gotten so bad that she ends up having to sit out at recess and is almost kicked out of school. The thing that saves her is the new kid in school, a little girl named Ferris Boyd. The most amazing thing is that Delly helps Ferris as much as Ferris helps Delly - and the events that take place teach her not only patience, but also teach her to be compassionate and sympathetic to others. In fact, Delly ends up becoming a real "hummin bin" - which is like a human being, only better. Hummin bins are kind, creative, gentle and good.

Katherine Hannigan is the author of one of our favorite books, Ida B. I think True (...sort of) is destined to become a favorite as well. It is perfexcellent!

Holling Hoodhood is in 7th grade, and the only one in the class who doesn't go to religion classes on Wednesday afternoons. Consequently he has to stay in school and help his teacher. At first he cleans the chalkboard and pounds the erasers, but after a few weeks of this his teacher, Mrs. Baker, decides that he should read Shakespeare.

The thing is, Holling kind of likes Shakespeare, and he even takes a part in a community play (even though he has to wear feathers and yellow tights!)

Holling's family has to face some tough situations in the book. It is 1967. His sister is dating a long-haired hippie and becoming a flower child. The Vietnam War is going on, and there are as many people in support of the war as there are against it. Holling doesn't always know what to think: and I think this gives the readers a good chance to consider all of the ramifications of war.

This story takes place over the course of one school year. Mrs. Baker turns out to be incredible: teaching Holling to run, bringing professional baseball players to play catch with Holling and his friends after the game, and taking the whole class camping on the last day of school. She wins my vote as teacher of the year!

I'm not sure if kids will understand everything that happens in the story, but I do think you will be entertained by it. You might just want to share it with your parents though. I know they'll love it as much as I did!

#104 Technically, It's Not My Fault: Concrete Poems 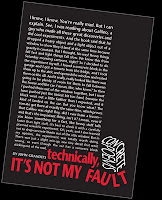 Whether or not you like poetry, you have to admit that this is a great name for a book!

Concrete poems are poems written with a shape to them. These poems actually have an image to go along with the words. It makes reading the poems a fun laugh-out-loud experience, and really helps add meaning to the poems. It even made me feel like writing some concrete poems of my own. You may feel the same way!

One of my favorites wa the title titled The Thank-You Letter. It reminds me of a thank you letter I might have written when I received a gift I really didn't want. The poem is written with footnotes (little extra notes at the bottom of the page). Each one is numbered, and there are little numbers among the words so you can read them within the sentences if you look up and down. Another one I thought was pretty funny was How We Ended Up With Plain Pizza. It sounded just like my family!

When you're done reading this book, why don't you write a few concrete poems of your own? You could send them to me and maybe we could make our own book. We could call it something like It Really IS My Fault! Just think how many kids would want to read our book!

#103 Cheesie Mack is Not a Genius or Anything

Cheesie Mack had me laughing out loud from the first page to the last! I am now a huge Steve Cotler fan (he's the author of this book: I guess I should say that he's Cheesie Mack!)

I read this book on my iPad - which was really fun because Cheesie makes many references to his website, and on the iPad you can just click on the link and you're there! It's a fun way to read a book, that's for certain!

Cheesie and his best friend George have a mystery: George found an envelope with a necklace and a 1909 penny (oops, I mean "cent") in it. They decide that they should return it to the rightful owner. But...the rightful owner lives in the scary haunted "toad house" - and delivering it would mean actually meeting the lady who lives there.

Now at first the penny seems pretty meaningless, so George and Cheesie decide not to mention it, but when they realize it is very important to Ms G. J. Prott they decide they must give it to her. However, what should they do when they discover the penny is worth thousands of dollars? What would you do? (And more importantly, have you checked your pennies lately? What if you had a special 1909 penny?)

You will absolutely have to visit www.cheesiemack.com to enjoy more from the story. It's great.

And - a great big welcome to my new readers! I'm glad you've joined the students at PME: your comments have been awesome! Keep on reading!!
Posted by Share HOPE 2020 at 1:22 PM 1 comment: