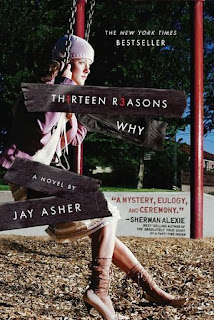 As soon as I entered the high school library I knew I wanted to read this book. I had heard about it several years ago and had always wanted to read it, so now I had my chance!

Thirteen Reasons Why has been around for a while - it was published in 1987 - so it is by no means a new book. However, it is an incredibly powerful book, and one that needs to remain on the "must read" list for teens. 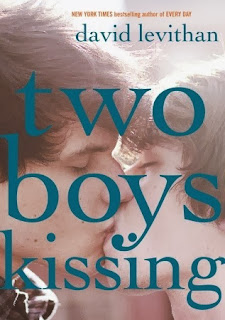 Being new to the YA lit world I wasn't sure what to expect when I began reading Two Boys Kissing. Truth be told, I was terrified to begin reading it. I started it a few times and then put it aside. Finally, last weekend, I read the cover flap once again and decided I needed to give it a sincere try.

Two Boys Kissing is narrated by the voices of a generation of gay men who died from Aids. Suddenly just in knowing that I understood so much better what was being said in this tale of young men coming to terms with their gender identity.

The storyline circles around Craig and Harry - former boyfriends, now good friends, who have decided to attempt to claim a Guinness World Record for the longest kiss. In this story we meet the friends, the supportive (and not so supportive) family members, and members of the community who look on with a variety of responses - from curiosity, to admiration, to disgust, to outright hatred.

Throughout the book we meet a few other young men who are dealing with their own issues: a new couple who has just met and are getting to know each other, and also Cooper, a teen feeling threatened and abandoned by his family and on the verge of suicide.

But the most amazing part of this book is the beautiful haunting way in which the gay men tell the story. There are so much emotion in their words: you can feel the anguish, the heartache, the love, the regret, and so much more. I could go on and on recounting my favorite lines in this book. Many times I felt a lump in my throat and tears in my eyes. I can't say it enough: Two Boys Kissing is beautifully written.

But again, I have to say, I loved the writing in this book. I loved hearing the voices of those who came before and understanding their love, their perspective, their loss. I only hope I'm not the only one in my library who will read it.
Posted by Share HOPE 2020 at 8:07 PM No comments: 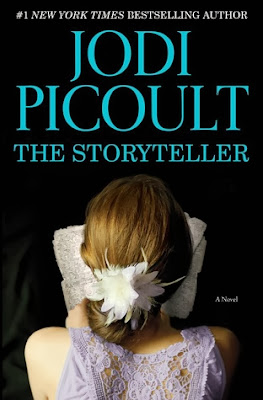 Jodi Picoult has been one of my favorite authors for years - and in The Storyteller she did not disappoint!

If I must be honest I found The Storyteller to be a slow starter. I really didn't get into it until about halfway through when Sage's grandmother began to recount her story as a Holocaust survivor. The horrors that she endured broke my heart. It is simply impossible to understand how anyone could treat another human being in such an inhumane way.

The discussions in this book about good and evil, and about how bad people can feel remorse and can become something different were so real! Although it is impossible to relate to anything a Holocaust survivor might have to deal with, I do remember how years ago my local church had a pastor who was quickly and quietly asked to leave our church. I never knew what transpired but I understand it had something to do with an affair, or perhaps more than one affair with women in the church. Years later we wanted to have this pastor officiate at my father's funeral because the children in my family viewed him as one of the most incredible spirit-filled people we had ever known. What a surprise when the church asked us not to contact him, and we began to learn a little bit about the things that caused him to leave our church. But to us he was a GOOD man - and it was almost impossible to recognize the fact that he hadn't always made the right decisions.

Sage's connection with the man who had inflicted such pain against her grandmother but had been a friend to her really made me pause and consider how so many of us have two sides to reconcile. Of course, most of us are not reconciling anything as horrific as the brutal torture and killing of thousands of innocent people, but most of us do have incidents in our lives where we behaved badly and regretted it.

As I read The Storyteller I had a chance to consider the terrible wrongs that the Jewish families faced. It's so hard to come to terms with the terrible events that took place at that time. Reading this book will put you face-to-face with those horrors.

The Fault in our Stars

Hopefully you have noticed the big change in my postings. The books I am reviewing now are geared more toward high school students, since I am now working in a high school. 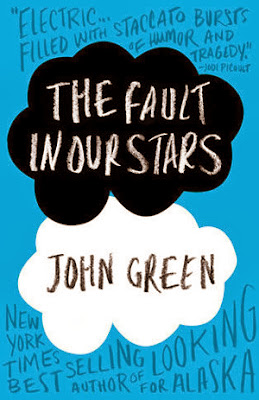 I loved, LOVED, LOVED The Fault in our Stars. However, I made the mistake of reading most of it on the airplane as I traveled to Anaheim, and I was choked up the majority of the time. The problem with books like this is that they tear your heart out. Anytime you read a book about cancer you just know that the worst thing is going to happen, and you just have to hang in there until it does.

Yes, there is a bit of predictability in this book, but the thing I loved the most was the overwhelming sense of hope and joy. I actually laughed amid my crying, and that is an amazing thing. Hazel and Augustus are the most believable and adorable teens I think I've ever had the pleasure to "meet". Their parents were a bit too sappy, and a bit too generous. However, had I been a parent of either Hazel or Augustus I would've have been just as sappy and just as giving. Who wouldn't?

I found the Fault in our Stars to be beautifully written, charming, yet heart-breaking all at the same time.

Now, the students in my school (and I'm sure across the country) are reading about vampires, time travel, and future worlds, and to be honest, I'm getting a bit tired of that. The Fault in our Stars feels so gut-wrenchingly real - which makes me cry - but also makes me glad I opened the cover! I know it's an older book, but if you haven't read it you'll want to check it out today!
Posted by Share HOPE 2020 at 4:25 PM No comments:

First of all, an apology! I haven't been posting about the books I've read. Yes, I'm still reading! But I've moved from my elementary school in Sartell to a high school media specialist/curriculum integration specialist in Park Rapids, Minnesota. It's been a fun move, since I taught in this district for 23 years, but it's been crazy busy!

Secondly, I'm moving up to longer books! I've read some great ones so I will do my best to post them this weekend and get caught up!

First up: the biography of Steve Jobs. I thoroughly enjoyed reading this book, although I have never been a big fan of biographies. This one did a good job of telling the real facts about Steve Jobs. At least, as far as I could tell they were the facts.

I heard Steve Jobs speak at a conference in Chicago back in 1999 or so. We were thrilled to be seated in the front of the auditorium, filled with about 10,000 conference attendees. The way he was described in the book when he spoke to a crowd was so true. He had us cheering and "oohing and aahing" over the shiny new iMacs he was describing. At the time I think we were looking at the multi-colored iMacs, which were amazing little machines that kept on running.

It was interesting to me to read about his marketing savvy, and his sense of beauty in packaging. Who hasn't opened a new Mac, iPad or iPhone and not been impressed with the simplicity and beauty of the packaging. So reading about that in the book really gave me an appreciation for what a creative genius he really was. It also gave me a new perspective about his personality that I wasn't as aware of; he was a complete jerk to his friends, employees and coworkers, and that had to be so difficult for those he knew.

Overall I loved reading this book. If you enjoy biographies, or if you have an interest in technology or marketing, I think you will enjoy it too! 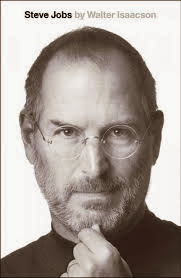