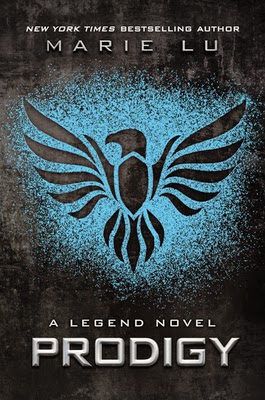 Now that June and Day have escaped the Republic they are ready to join the Patriots. We first find them in Vegas, where they blend in with other soldiers and citizens quite well, while making enough of a show to be recognized by Kaede and Tess.

They immediately hear the news that the Elector has been killed, which leaves the elector's son, Anden (whom June met in Legend), as the new leader.

June and Day agree to this plot and June allows herself to be caught so that she can be taken to Denver. Her job is to gain the trust of the new elector, assist in getting the rebels into the city, and finally, assassinate Anden.

Of course, things aren't all they seem - and it's often difficult to tell which faction is in the right. There are plenty of twists and turns - and friends who suddenly become enemies. But through it all, June and Day remain faithful to eachother, which keeping a sole focus of saving Day's brother Eden along the way. 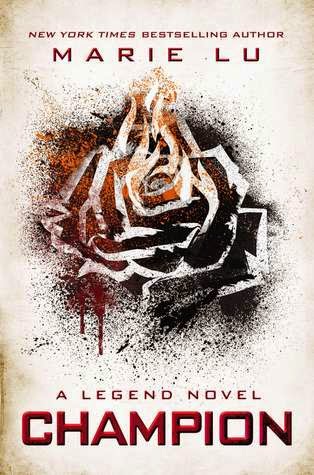 Prodigy is a great continuation of Legend - and when I completed it I couldn't wait to grab a copy of Champion and continue the series!

Champion proved to be a fantastic final book to the Legend trilogy! It was as exciting and fast-paced as the first two books, and there were many additional twists and turns as June and Day attempted to protect the republic from the rebels and from the Patriots.

By this time both Day and June have become heroes among the people - and have changed their allegiance to the republic.

Once again I was struck by the possibilities that the Legend series offers. A country facing huge challenges due to drought and water shortage. Countries around the world taking advantage of the situation and becoming world powers. Cruel and corrupt leaders. Massive amounts of technological knowledge. It is the perfect illustration of a country losing its ethical and its democratic beliefs.

I thoroughly enjoyed the entire Legend series by Marie Lu - and I hope that you do as well!

Between the Lines by Jodi Picoult and Samantha Van Leer 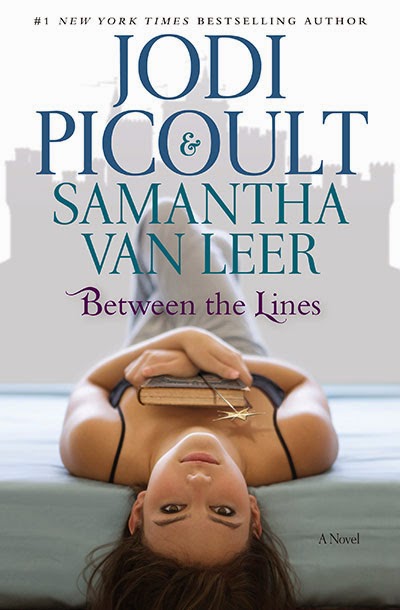 I ran into this book when it was a freebie in the Kindle store. Because I love Jodi Picoult, and because I was curious about the second author, Samantha Van Leer, I decided to download it and find out more.

I was thrilled to discover the relationship between Jodi and Samantha. What a great idea: for a mother and daughter to write a book together! At this point I wanted to tell my book club to download their free copy, but I neglected to do that. Bad call on my part!

The book is easy and quick to read, and has an engaging storyline. Imagine that the characters in a book have actual lives. Now imagine that a reader becomes infatuated with one of the storybook characters and talks to him...and he takes a chance and talks back! And then, of course, they fall in love.

I think my favorite thing about this book is that it was written by a mother and daughter. What a wonderful collaboration! They have followed it up with another book titled Off the Page. This one didn't premier as a free book, however, so I guess that speaks volumes to the success of the first one (which is also no longer free - hence the bad call on my part, in not having my book club members download it immediately!)

Enjoy a little fairy tale today - and give Between the Lines a try! In the meantime, enjoy this interview with Jodi and Samantha.

I Was Here by Gayle Foreman 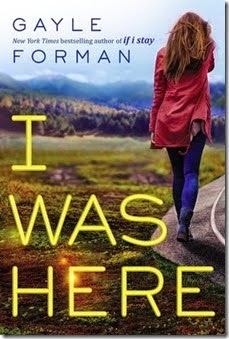 Gayle Forman's recent book I Was Here simply made me sad. The book is all about best friends Cody and Meg, who have been inseparable. The novel begins with Cody attending funeral and memorial services for Meg, and we learn how Meg has died, by committing suicide.

Meg's family has been determined to keep her depression a secret, believing, as I think many families believe, that she will get better, and that she will be ostracized if others know what she's dealing with.

I Was Here is honestly and beautifully told, and is a message that young adults need to read. There are many young people struggling with depression. This book gives the clear message that reaching out to others is not a sign of weakness, but a sign of strength - and that telling someone is the first step in getting help, not just as a young person but as an entire family.

As much as I loved this book I couldn't help but feel concerned that there will be young people who read it without reading the entire message, and that rather than helping them it will be one thing that deepens their depression. I hope that I'm totally wrong about this! The resources that are provided in the book are excellent, and the message is clear. 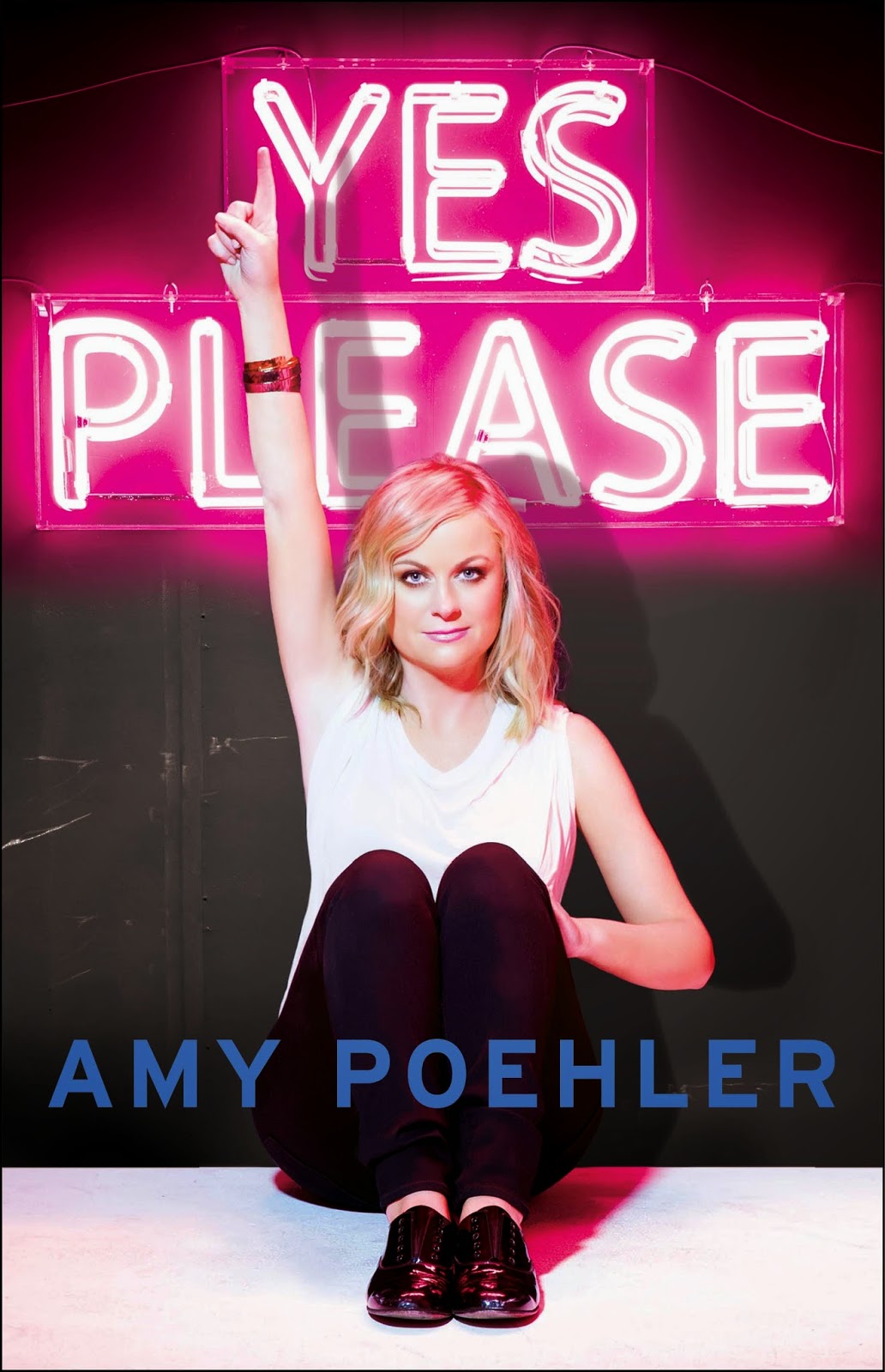 Prior to leaving on a trip I needed some reading material on my iPad, so I purchased a digital version of Amy Poehler's recently published, Yes, Please. I breezed through it on the plane and by the pool on a relaxing vacation.

I must say I enjoyed the short chapters and Amy's easy-to-read style. True to what I expected, the short tales from her busy life as comedian, actor and parent were humorous - and reminiscent of my own days with young children (minus the on-stage, famous actress part). I find Amy to be very personable, funny, and honest, and these peeks into her life were definitely honest and funny.

I have to say that when I got to the last part of the book I didn't feel as strong a connection because I was not familiar enough with the Saturday Night Live cast and especially the cast of Parks and Recreation. Although it was a show I watched a few times, it wasn't one that I followed on a regular basis. I think people who are fans of the show would be fans of this book. It gave a lot of insight to the funny "behind the scenes" moments, and I'm sure it would make the reader feel as if they knew all of the characters personally.

I found it to be an interesting, easy read. It certainly wasn't the highlight of my vacation - but it was an enjoyable diversion from some of the young adult novels I typically read. If you're a fan of Amy Poehler I'm sure it's one book you won't want to miss. Otherwise, she's young enough and talented enough that they'll be another memoir coming down the road for her one day. 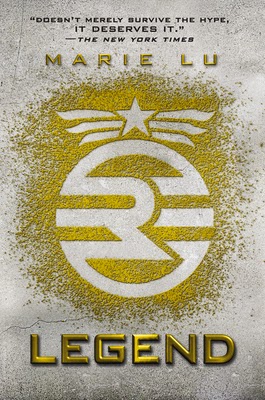 I started reading Legend on Friday, and didn't come up for air until I had read the entire book! My high school book club had recommended this one, and, to be honest, I wasn't all that excited about reading it. I took it home with me, but didn't really think I would read much of it. I wasn't looking forward to reading yet another dystopian story (because, really, what else is there in YA these days?)

However, I have to say that I really enjoyed this book. I immediately felt an attachment to June, as well as to Day. Their characters were likable, and believable, and I cheered when they recognized how much they cared about each other. The only thing I didn't like about June and Day was that they seemed to act much older than their age, and I didn't like the fact that they were only 15, when they seemed so much older.

The premise of this book is that the energy and water issues of the US have divided the nation so much that it has splintered, and regions of the US have developed their own government structure. The regions are at war with one another, and this internal fighting has caused the US to drop far down in its standing as a world power. I found this issue to be very compelling and realistic - frighteningly so, in fact.

Overall I loved this book. And I'm quite sure that my book club members felt the same way. I look forward to reading Prodigy and Champion!