Intrusion: A Novel by Mary McCluskey 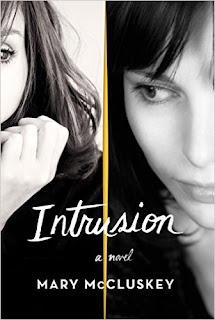 The story begins with Kat and her husband mourning the loss of their son, who was killed in an accident. Although her husband, Scott, is back at work, and appears to be dealing with the tragedy, Kat cannot move beyond her grief and can barely leave the house. In fact, Kat is having such a difficult time coping that she has considered (and even planned for) ways to commit suicide.

Kat's sister and husband are supportive and encouraging, but both are becoming frustrated that Kat is having so much trouble accepting their loss.

When a wealthy new client moves to town and it appears Scott may be asked to represent her, he begs Kat to accompany him. It is here that Kat and her sister make a startling discovery: this new client is an old friend, Sarah Cherrington. As she reasserts herself into their lives and attempts to become close friends with Kat (and Scott), Kat begins to wonder if Sarah is there to make amends for her past or to hurt her the way she had years earlier.

I enjoyed the book and found it to be an interesting and captivating read. It wasn't as suspenseful as I had thought it might be, but definitely kept my attention until the very end.

I believe this is Mary McCluskey's first published novel. You can learn more about her at: http://www.marymccluskey.com/.
Posted by Share HOPE 2020 at 11:13 AM